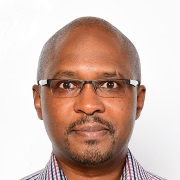 Dr. Samuel Ndogo is an alumnus of the Bayreuth International Graduate School of African Studies (BIGSAS), University of Bayreuth, Germany, where he graduated in 2013 with a PhD in African Literature. His PhD thesis is already published under the title Narrating the Self and Nation in Kenyan Autobiographical Writings (Berlin and Zurich: LIT Verlag, 2016). In this book, Ndogo analyses autobiographical works of four Kenyan writers to demonstrate how the self is used as means of interrogating and inventing Kenyan nationhood. He also shows that the autobiography can be considered as a form of cultural imagination, memorialisation, historiography and politics of representation. Indeed, the book adequately illustrates how individual and collective memories are used to fashion personal as well as national identities.

Currently, Ndogo is a Senior Lecturer and Head of Department at the Department of Literature, Theatre and Film Studies, School of arts and Social Sciences, Moi University, Kenya. He has a passion for literary studies as well as History and Governance. Other research interests include auto/biographical writings, prison narratives, Diaspora and postcolonial studies, literatures in African languages, translation, performance and cultural studies. His latest book is titled Tracks and Traces of Violence: Representation and Memorialization of Violence, Views from Art, Literature and Anthropology (Berlin and Zurich: LIT Verlag, 2017). Ndogo has been an organizer and convener of several international conferences, the recent one being a symposium themed “Power to the People? Patronage, Intervention and Transformation in African Performative Arts,” which took place between 20th and 25th March 2018 at Moi University. The symposium was a product of the continuing collaboration between Moi University and the University of Bayreuth, Germany. He is a co-editor of a forthcoming publication from this symposium expected in 2019, as well as an organizer of a follow-up symposium to be held at the University of Bayreuth in 2020.

Besides teaching and supervising Masters (MA) and Doctoral (PhD) students, Ndogo has published several journal articles and book chapters. As part of his future prospects, he is researching on “Potentials and Opportunities of Creative Industries in Kenya.” He also serves as an external examiner for several universities in Kenya and abroad. Additionally, he is currently involved in formulation and review of curricula at undergraduate and postgraduate levels at Moi University.

Between January and April 2018 Ndogo was involved in a consultancy/research project “Structures and the Development Potential of Creative Industries in Kenya”, commissioned by the Federal Ministry for Economic Cooperation and Development (BMZ) of Germany.

As BIGSAS alumnus, Ndogo has been involved in the close collaboration between Moi University and the University of Bayreuth in many ways. For instance, he was awarded a Visiting Fellowship at the Bayreuth Academy of Advanced African Studies under the Working Group C whose theme was “Concepts of Nature and Future” in Summer 2014. (http://www.bayreuth-academy.uni-bayreuth.de/en/arbeitsgruppen/Sommer-2014/Fellows/index.html). He has also been awarded the 2019-2020 Africa Multiple Cluster of Excellence Fellowship Program of the Bayreuth Academy of Advanced African Studies.

Ndogo’s participation in the organization of the BIGSAS Festival of African and African-Diasporic Literatures is also a clear confirmation of his role in the partnership between Moi University and the University of Bayreuth. He is also an active member of the African Literature Association (ALA), and has attended ALA annual conferences in the USA, South Africa and Germany. Currently, he is involved in several transformational leadership and mentorship programmes within and beyond the University.